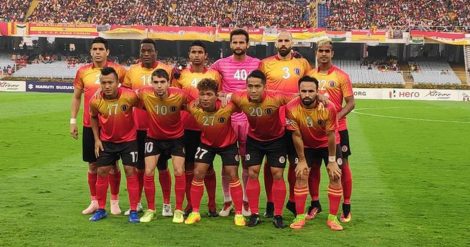 Needed a win to stay in the hunt. East Bengal under this circumstances faced Minerva Punjab in their penultimate match of I-League today.
East Bengal won the encounter with a solitary goal form Enrique Esqueda.
The Mexican scored from a pass by Jaime Santos in the 75th minute of the match.
Enrique Esqueda was soon replaced with P Rohlupuia after the goal.
Coach seemed wanting to get the best out of him for the final encounter of I-League.

First half of the match was dull. East Bengal enjoyed most of the possession in the first half. But East Bengal failed to penetrate. Both East Bengal and Minerva was denied by the bar post.

Going for the kill East Bengal made lively substitutions in the second half. Kamalprit was substituted with Samad. Brandon came in for Tony Dovale. With the injection of fresh leg East Bengal got the desired result.

East Bengal custodian Rakshit Dagar denied the home team in couple of occasions.
Salam Ranjan Singh had an exceptional game. Salam played in place of Borja Gómez Pérez, who was out for conceding 4 yellow cards.

Johnny Acosta and Kassim Aidara had another great match.

Danmuiya Ralte was adjudged Hero of the Match.

With this win East Bengal reached 39 points in 19 games. Chennai are in 40 from same numer of outings.

The final matches of the tournament are to be played on 9th of March.
If Chennai loses point and East Bengal wins, East Bengal will be crowned as champions of I-League 2018-19.
Any other result will see Chennai City Fc as champions.