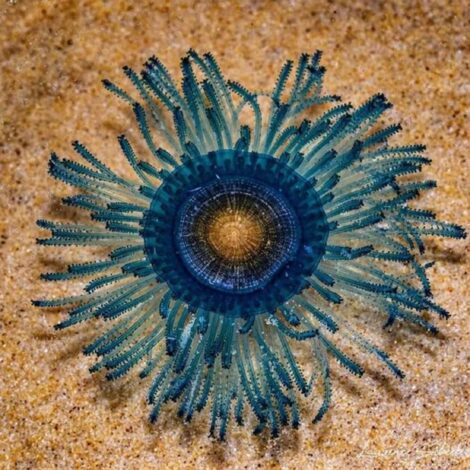 Although its name, the mesmerizing Porpita Porpita or blue button is not a jelly fish. It is a hydra. They are mostly found in the North Atlantic ocean and western and eastern Mediterranean sea. Most jellyfish produce some toxins but Porpita Porpita is not that poisonous. Its sting hurts a bit but causes skin irritation when touched. Porpita porpita is a hermaphrodite which has two main body structures: the float and the hydroid colony. The float is the main part of the body, which is a golden brown color and circular shape. The hydroid colony are the branches that extend out and look like tentacles. The blue button grows up to 3 cm (30mm) in diameter.Many refer to them as the “blue button jellyfish” but that is deceiving, as they are not jellyfish! The blue button is superficially similar to jellies, but it is a chondrophore, which is a colony of hydrozoan polyps. Hydrozoans all live at the surface of the open ocean, and are colonies of carnivorous, free-floating hydroids. They are drifters and flow along with water current. They usually wash ashore on the beaches during the summer months.