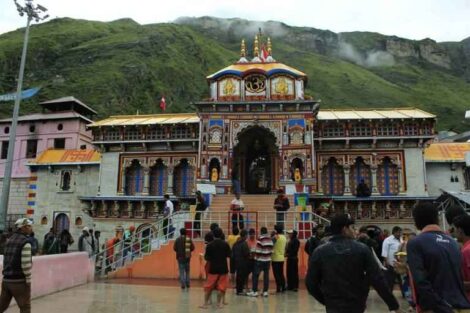 Badrinath or Badrinarayan Temple is dedicated to Lord Vishnu. The main entrance of the temple is decorated with beautiful paintings. The temple and town form one of the four Char Dham, located in Garhwal hill tracks in Chamoli district along the banks of Alaknanda River at an elevation of 3,133 m (10,279 ft) above the mean sea level. It is one of the most visited pilgrimage centers of India, having recorded 1,060,000 visits. The image of the presiding deity worshiped in the temple is a 1 ft (0.30 m), black granite deity of Lord Vishnu in the form of Badrinarayan. The deity is considered by many Hindus to be one of eight swayam vyakta kshetras, or self-manifested deities of Lord Vishnu. There is no historical record about the temple, but there is a mention of the presiding deity Badrinath in Vedic scriptures (c. 1750–500 bc) which men’s it could be about 4000 years old shrine. The temple finds mention in several ancient books like Bhagavata Purana, Skanda Purana and Mahabharata. According to the Bhagavata Purana, “there in Badrikashram the Personality of Godhead (Vishnu), in his incarnation as the sages Nar and Narayana, had been undergoing great penance since time immemorial for the welfare of all living entities”. Badrinath temple was opened on May 15, 2020 after winter break due to covid 19.