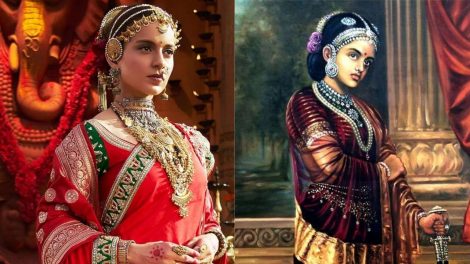 Manikarnika: The Queen of Jhansi is an Indian commercial movie based on the life of Rani Lakshmi Bai of Jhansi and related historical events.

Movie is directed by Radha Krishna Jagarlamudi, and Kangana Ranaut who has also played the lead role in the movie.
Screenplay was done by by K. V. Vijayendra Prasad.
The movie is produced by Zee Studios, Kamal Jain, and Nishant Pitti.
The film was released on 25th January, 2019.

A special screening of the film was also done at Rashtrapati Bhavan on 18th of January. The President of India Ram Nath Kovind felicitated the casts and the crews of the movie after the screening.

The film went well with the critics and audiences in general.
Kangana Ranaut’s performance was acknowledged by audiences at large.

She once rescued a calf of a village girl, taken forcefully by the Britishers. She later gave birth to a boy Damodar Rao. But Sadashiv Rao one of Gangadhar Rao’s brother seemed to be ploting against the king and the queen. He poisoned Damodar Rao by the help of a maid. The king and queen adopted a child. This made Sadashiv Rao angry he revolted againts the kingdom.

Soon Gangadhar Rao died. The British claimed the throne according to the Doctrine of Lapse. Lakshmi Bai organized an army to fight the British. He claimed the fort of Jhansi. But soon Sadashiv Rao’s treachery lead the fall of Jhansi. The queen fled Jhansi and regrouped ad Gwalior along with Tatya Tope. Gwalior was ruled by a week Scindia king at that time who surrenders to Lakshmi Bai. The queen of Jhansi lead his army against one last battle against British soldiers. Staring at possible defeat Rani Lakshmi Bai set herself in flames staring at Hugh Rose.

The movie did not reflect exact historical events during the period. But it was a good movie with Kangana Ranaut playing a stellar performance. Jishu Sengupta also performed well in his limited opportunity in the role of Gangadhar Rao.
Danny Denzongpa as Ghulam Ghaus Khan was also impressive.