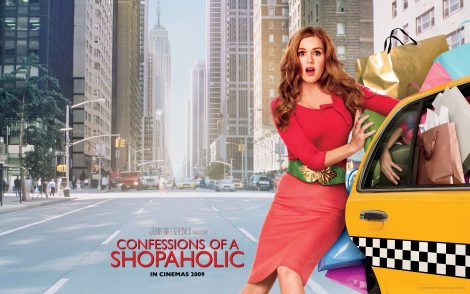 Rebecca Bloomwood is a Shopaholic. She is a shopping addict.and stays with Suze, her best friend.
Rebecca is also a journalist of gardening magazine. And she dreams of joining an fashion magazine like Alette.
Rebecca almost spends every last penny she had on cloths and other fashion items.

She came across a green scarf. She had already spend most of her savings. But she still wanted to have the green scarf for an interview with Alette. With shortage of cash she used cash and 3 credit cards to pay for the scarf. But she was still 20 dollar short. So Rebecca rushed to a hot dog store and offered the seller to buy all his hog dogs with a check if he pays her back the change with cash. Rebecca said it was for her sick aunt, who wanted a scarf. Someone purchasing a hot dog gave Shopaholic Rebecca the 20 dollar she needed.

Rebecca attended the interview. To her surprise it was same person who handed him dollar 20 earlier. It was Luke Brandon, editor of Successful Saving, conducting the interview. Rebecca threw the scarf before entering the interview room. But Luke’s assistant handed back the scarf to Rebecca. Rebecca left the hall thinking it to be over for her.

Rebecca and Suze got drunk later in the evening . They send letters to both Successful Saving and Alette. They send out wrong letters to wrong organization being drunk.

Luke Brandon got impressed with the letter and hired Rebecca. Bloomwood was handed and assignment. The assignment got tough for her since it was related to finances. And her idea on finances was not good. Later she purchased a cashmere coat. Rebecca realised she was robbed. It was not real cashmere. Rebecca wrote an article about it. She published the article in the name of “The Girl in the Green Scarf”. The article became an instant success.

Derek Smeath, a debt collector started chasing Rebecca to get her debt settled . But both Rebecca and Suze put in several excuses and tried to avoid Mr. Smeath. Suze also made Rebecca attend a Shopaholics support group. But that was not much helpful.

While before entering she met a lady. She appeared to be friendly. Thinking it to be a member of the support group Rebecca handed her the clothes to keep it in her car. Since it would not look nice to go into the support group with the packages. Rebecca later realised it was the new group leader. She gave all the clothes to a shop for charity. Rebecca later came back for the clothes. But the shop owners said they would need money. Rebecca didn’t had money to buy back both the clothes. So he took back only the dress for the interview. Rebecca thought she would take her bridesmaid dress later.

Rebecca went to the TV interview. Derek Smeath confronted Rebecca in the interview. The truth came out. Successful Saving terminated Rebecca was by . Luke became upset with Rebecca.

Suze finds out about the bridesmaid dress. She was upset.

Finally, Rebecca sold all her clothes to met her debts. The green scarf was sold for 300 dollars. Rebecca got back her bridesmaid dress. She attended Suze’s wedding. Outside the wedding hall, Luke was waiting for Rebecca. He came to know about the sales of Rebecca. Luke handed back Rebecca her green scarf. It was actually he who made the bid.
Rebecca joined the new firm started by Luke.
And the movie ended in a happy note.

The movie is available in Netflix.