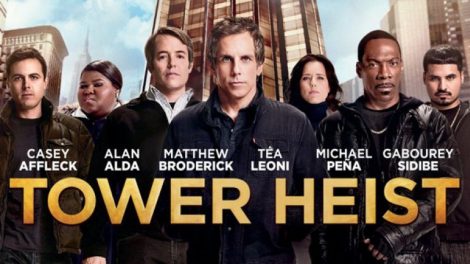 Tower Heist is a 2011 Hollywood, American Movie. It is a Heist Comedy movie.
Heist Movies are related to crime planing, execution and aftermath of a theft. Comedy emphasis on humour.
The movie is directed by Brett Ratner. Ted Griffin and Jeff Nathanson did the screenplay . The movie is based on a story by Bill Collage, Adam Cooper and Griffin. Benjamin Edward Meara Stiller or Ben Stiller played the lead role in the movie.

Josh Kovaks is a tower building manager in New York City.
Ben Stiller played the role of Josh Kovaks.
Along with him there are few other employees in the tower.
Charlie Gibbs is a concierge. Charlie is also Josh’s brother in law. He is expecting a child with Josh’s sister.
Enrique Dev’Reaux is an elevator operator.
Lester, a doorman who is on verge of retirement.
Odessa Montero is a Jamaican maid, immigrant and is staring at deportation.

Arthur Shaw is a rich businessman and a valued penthouse tenant. Josh finds him getting kidnapped one morning. Josh ran after the car with Arthur Shaw in it. But he was tackled by FBI. Josh came to know that Arthur was actually being arrested on an attempt to flee the country. He had previously mastermined a $2 billion Ponzi scheme. Josh thought is should be all mistake.

Josh told the stuff of the tower that Arthur in charge of the pension of the employees. Josh requested Aurther about it. And Aurther took over the charge of the Pension. And with recent development they may have lost it.
Lester, the doorman attempts suicide. But he was saved. Josh visited him to the hospital. Josh learnt that Lester had handed all his life savings to Aurther. And with Aurther getting arrested all that money is now lost.

Aurthur was put under house arrest in the tower. Josh, Charlie, and Enrique confronted Shaw. Angry Josh smashed a Ferrari inside Shaw’s apartment.

Mr. Simon, Josh’s boss fired all three of the employees present ad responsible for the action.
Josh met agent Denham. Denham told Josh that Aurther had hidden $20 million somewhere. Josh create a plan to break into Auther’s apartment with his team, on the thanksgiving day when Aurther will be attending to court.

The team had an idea that all the money was hidden inside a safe in the wall. But they realize that the money was used to purchase gold. And this gold was used as parts to assemble the Ferrari inside the apartment.

The team got the car and send its parts to all the employees of the tower.

The movie is available in Netflix for viewing