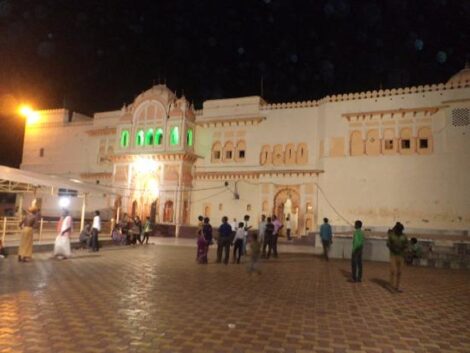 The Ram Raja Temple is located in Orchha, Madhya Pradesh. This is only temple in India where Lord Rama is being worshiped as a king. It resembles a palace. This huge peach colored building was once the palace of queen Ganesh Kumari, the wife of King Madhukar Shah who was the ruler of Orcha. At that time it was known as Rani Mahal. In the temple Lord Raja Ram is accompanied by Sita (on the left), brother Lakshmana (on the right), Maharaj Sugriva and Narsingh Bhagwan (on the right). Durga Maa is also present in the darbaar on the right side. Hanuman ji and Jambavan ji are praying just below Sita. The specialty of this temple is that Lord Ram has a sword in his right hand and a shield in the other. Shri Ram is sitting in Padmasan, with the left leg crossed over the right thigh. The King of Orchha Madhukar Shah Ju Dev (1554 to 1592) (मधुकर शाह जू देव) built the temple as his wife Queen Ganesh Kunwari (गणेश कुंवरि), also called Kamla Devi was a strong devotee of Lord Ram. Originally, in the temple lord Ram was standing position and the queen was serving Him 3–4 hours everyday in standing position and used to get tired. Lord Rama requested her to serve Him siting only but queen replied that Your Lordship is standing then how she can sit . The deity of Lord Rama sat down on hearing this from queen, also as promised by the queen, Lord Ram is the King (Raja) of Orchha, hence the name Ram Raja Temple. Jai Jai Shri Ram