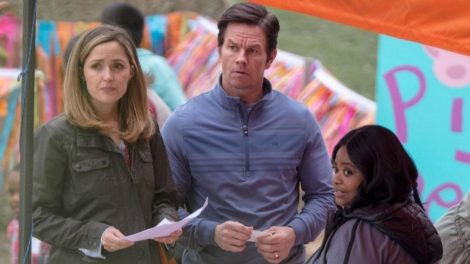 Pete Wagner played by Mark Wahlberg and his wife Ellie Rose played by Byrne didn’t had any kids. They enrolled in a foster parent support group. However they were not sure of adoption.
Karen and Sharon were two social workers who used to run the foster group. In other words they used to provide guidance to the parents.
The couple Pete and Ellie met Lizzy. Lizzy was a teenager. The couple,
however were hesitant about adopting any teenager.
Lizzy told Ellie that teenagers are hard to handle so no one wants to adopt teenagers.

Pete and Ellie got impressed talking to Lizzy and that made them wanted to adopt her. After that, Karen and Sharon let them know that Lizzy’s mother was a drug addict. Lizzy’s mother set their home on fire so she was made to serve a sentence After that, the couple were also informed that Lizzy had two younger siblings. One of them was a boy, the other one girl. After that, the couple met the siblings. Pete accidentally broke the kid boy’s nose while playing with him. The meeting was not an instant hit.

Pete and Ellie met Ellie’s family on a dinner. The family weren’t very supportive of the couples decision of adopting child. In addition to that they were worried. But Ellie and Pete got determined.

After that, the couple took Lizzy in addition to her two siblings Juan and Lita in their home. Both of them started living together. They were excited at the first. They were very happy. But the honeymoon period was short lived. Things got messy. For instance, Lita showed her disobedience in almost every thing. Firstly, She would make huge drama in shopping malls. In addition to that she would refuse to eat anything but potato chips. And Juan was accident prone. And in addition he used to get nervous in every situation.

But with time Juan and Lita accepted Pete and Ellie as their parents. Juan called Ellie “mom”. Juan was having a nightmare. Ellie comforted him and put him back to sleep. And Juan called her “Mom”. Lita called Pete “Dad”. Pete fixed Lita’s doll. Lita called him dad after that.

But Lizzy was the problem. The couple had problems handling the teenager.Once she was grounded because of coming late from a friends hangout. Also she didn’t called or texted Pete or Ellie. Then she called her friends over. Her friends insulted Ellie. And Ellie asked them to get out of her house. Ellie made them to jump of the window in addition to that.. Lizzy went out of the house. Pete was chasing him. Pete was working with Juan before that . Jaun accidentally nailed his feet. Everyone rushed to hospital.

Pete’s mother got alone with all the kids very nicely from the start. She was excellent in handling all the kids. Lizzy was fond of her, too.

Lizzy was once caught sending nudes to her boyfriend. The couple confronted some harmless kid thinking him to be her boyfriend.
But they realized it was the school janitor who was having affair with Lizzy. Pete and Ellie assaulted him and put him to jail for child abuse.

After that, the mother of the children came back from the jail. Lizzy made her file for the custody of the children. Lizzy’s brother and sister, wanted to stay with Pete and Ellie though.

Three months later there was another hearing for custody. Finally, Pete and Ellie got the custody of the three children.

Not only the movie was emotional but also funny. As the performances was good therefore the movie was entertaining. In conclusion a good movie to watch.

One thought on “Instant Family”