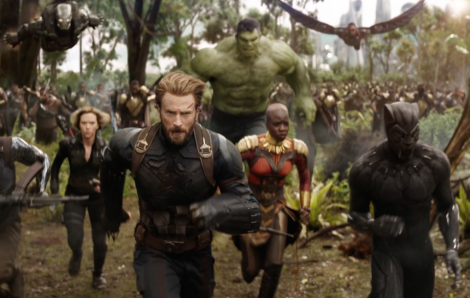 The movie is produced by Marvel Studios. The movie is distributed by Walt Disney Studios Motion Pictures. It is the third movie of the Avengers series. The first Avenger movie was The Avengers released in 2012. The second Avenger movie was Avengers: Age of Ultron released in 2015. It is the nineteenth Marvel film. Anthony and Joe Russo, directed the movie. Christopher Markus and Stephen McFeely were the writers of the movie. The movie has a huge cast. Most of the marvel characters feature in the movie.

are some of the important characters of the movie.

There are six powerful infinity stones. Each with immense power. Each one is guarded by a MArvel team. And each of them has separate powers. One who can acquire all the stones could become the most powerful in the universe.

Thanos is a fictional supervillain marvel character. He was power hungry. He wanted to acquire all the Infinity stones. Thanos wanted to control the whole universe and restore the balance of the universe. He wanted to get rid of poverty and lawlessness by sacrificing half of human race. That would eventually restore discipline in the universe.
One thing about the super hero movies is that the Super villains are right in most aspects. But the way they fallow is wrong.
Thanos was right about the chaos in society. But his concept to get rid of half of the population was madness.
The Avenger team together with all other Marvel team came together to stop Thanos from this madness in this movie.

Thanos acquired one of the Infinity stone from his attack in planet Xandar. It was the Power stone.

Thor, Loki and Hulk and other remaining population of Asgard were in a spaceship at that time. Thanos attacked the spaceship and demanded the Space Stone. Thor earlier ordered Loki to destroy the stone as it could be dangerous if it falls in the wrong hand. But Loki was week to destroy it. Loki gave the stone to Thanos and tried to attack him. But Thanos killed Loki. Thor was also severely wounded and left to die. Hulk was injured and was thrown out of the ship. Hulk fell into the earth as Banner and could not regain his Hulk character throughout the movie.

The Guardians of the Galaxy team rescues Thor. Thor told them about Thanos. One Thor overcame his injuries he wanted to meet Eitri. Eitri was a dwarf who used to create weapons for Asgard Gods. Thor wanted to have his weapon before he could fight Thanos who was now with power of stone. The Guardians of the Galaxy team broke into two. Rocket and Groot accompany Thor to Nidavellir. Nidavellir was the place where Eitri and other dwarfs lived.

Peter Quill, Gamora, Drax, and Mantis went to Knowhere to stop Thanos from getting the Reality Stone. The reality stone was with Collector on Knowhere. Gamora was adopted daughter of Thanos. She predicted his way. But Thanos deceived them and captured Gamora. Star Lord was in love with Gamora. Gamora asked star lord to kill her if he fall in the hand of Thanos. But Star Lord Could not. Thanos already acquired the third stone before Guardian of the Galaxy team reached there.

Dr Strange tried to have vision of the future. He told that there was only one probability that they would be able to stop Thanos out of million outcomes. The team met Thanos. There they tried to get Thanos rid of the stones. But mad with anger of losing Gamora, Star Lord could not act as needed and Thanos regained ground. Thanos defeated everyone else. Finally Dr. Strange gave up the stone to save Iron Man’s life from Thanos.

The final stone was in Vision’s forehead. Banner, Captain America and Black Panther all took their final stand in Wakanda with their team. They wanted to prevent Thanos from getting the final stone.

In the meantime Thor reached Nidavellir. But he finds the planet getting lost. Eitri was lone survivor. He told the star from which the weapons were created was dead and it requires huge effort to bring it back to life. And with fall of Asgard, Thor didn’t had the power to do that. But Thor heroically bring back the star to life putting his life to stake. Groot extended his twigs and Eitri created Stormbreaker for Thor.

Tha wakanda forces were no match for army of Thanos. Finally rejuvenated Thor with a new weapon joined the scene and turned the battle. Thanos was on verge to reach Vision. Vision asked Scarlet with to destroy him. Scarlet witch destroyed Vision . But with the possession of time stone Thanos reverted the time. Got Vision back to life, took the stone from him which killed him.

One thought on “Avengers: Infinity War”