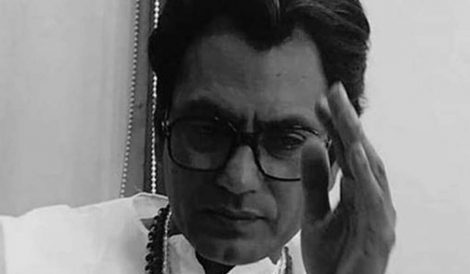 Thackeray is an Indian biographical movie based on the life of Balasaheb Thackeray.

The film is made simultaneously in Hindi and Marathi.

The film was released on 25th January 2019. The day was also 93rd birthday of Balasaheb Thackeray. The movie is written and directed by Abhijit Panse. The film stars Nawazuddin Siddiqui playing Balasaheb and Amrita Rao his wife.

Balasaheb Thackeray was an Indian Politician

Balasaheb was founder of the Political party Shiv Sena. And he remained as the chief of Shiv Sena till his death in November, 2012. He is famous for his role in Marathi Politics.

The story begins with Balasaheb was working as a cartoonist in Free Press Journal. He resigned from his post due to disagreement with his boss.

Balasaheb decided to start his own Marathi newspaper venture. He travelled from door to door for the finances. But his idea was rejected. Nobody showed interested in funding for a Marathi newspaper. This incident made him determined to fight for the rights of the Marathi people and Marathi Language.

The film covers incidents when Bal Thackeray issued ultimatum that if all the Marathi speaking districts are not bought under Maharashtra, no political leaders will be allowed in Maharashtra.
But Deputy Prime Minister Morarji Desai went ahead with his visit and Maharashtra turned into a battle grounds. People lost life and Bal Thackeray was imprisoned. Sena worker went on rampaging. Balasaheb had visit from George Fernandes in the prison. The situation got tensed. Finally Maharashtra government pleaded for peace. And Balasaheb signed an appeal for people of Maharashtra to maintain peace.

The film also showed meeting between Bal Thackeray and Prime Minister Indira Gandhi. Balasaheb gave his consent to emergency. But after the election Janata Dal came to power defeating Congress and indira Gandhi. Balasaheb was regarded as trator. But he decided to continue in his chosen path.
The film showed his him having good relationship with Maharashtra Congress Chief minister Sharad Pawar.

The movie also throw light on Balasaheb’s role during Mumbai riots, Babri Masjid Demolition and his Hindutva ideology. He defended himself in these controversial incidents.

Nawazuddin Siddiqui played a stealer role. But movie failed to impress much. The 30 minute interview of Balasaheb in Rajat Sharma’s AAP ki Adalat was much more entertaining than this 3 hour movie.

One thought on “Thackeray”